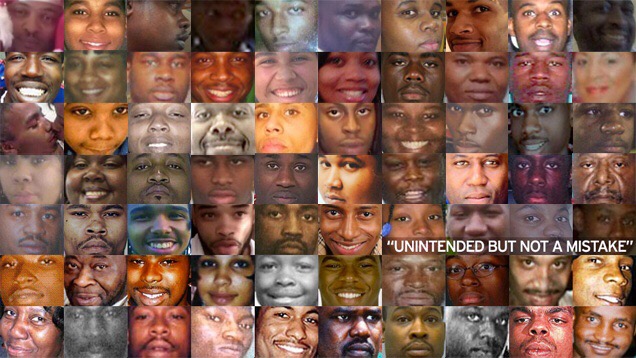 I saw a video today. An unarmed Black teen shot, his body stomped as he was dying by cops who were pissed because he ran. He ran. They shot him in the back. But he was stealing a car.

Tell the truth…How many times have you seen a Black person shot or beat or arrested and thought to yourself, “Well, he/she was probably doing something illegal or suspicious or disrespectful.” And then, you thought about the Black people you know, compared them and thought, “Not like [insert well-bred Black friend’s name here], who would never be doing anything like that, anything to get stopped by the police.”

Know this: [insert well-bred Black friend’s name here], who you think has never and would never be stopped, shot or harassed, probably has been.

In Davidson, one of the country’s most idyllic towns surrounding one of the country’s most highly selective colleges, I was confronted  – in a store – and asked to show ID, simply because I was shopping. The cop didn’t see my backpack, so he didn’t immediately know I was a student. In Davidson, that made a difference. Another time, I was stopped – walking down Main Street – simply because I was walking down Main Street. I don’t think I look suspicious. But do know I look Black. And that’s really all it takes.

I know men running whole companies and divisions today who were stopped by the police back then. Who are stopped even now. Just for walking and being. I have a friend who lives in a $2 million home and drives a luxury car but says he has to think about what he wears on Saturdays and how he drives through his own neighborhood. All my friends with sons – young men that will go or are going to some of the best schools in the country, who are straight A students, who speak multiple languages – tell them how to deal with the police if they are stopped. Hands at 10:00 and 2:00. Never reach for anything. Be deferential. Not even your license and registration, even if they ask. Not just polite but obsequoius. Because compliance can get you killed. Noncompliance, too.

When I was stopped in college, I was rightfully, righteously indignant. I told the cop he was wrong. Refused to show my ID. Dared him to insist I do so. The fact that I talked back in a town where Black people who weren’t students and Black men who could have been dared not, is proof that I was clueless. Today, I tell my daughters – who are going to two of the top colleges in America, who are brilliant, who are gracious and kind, who are women — Hands at 10:00 and 2:00. Never reach for anything. Be deferential. Don’t let them take you anywhere isolated. Compliance can get you killed. Noncompliance, too.

What do you tell your children when they go out? Don’t text and drive? Don’t drink and drive? I tell my daughters that, too. Right after I tell them this: Hands at 10:00 and 2:00. Never reach for anything. Be deferential. Compliance can get you killed. Noncompliance, too.

So, when you see the next video of a Black person being shot in the back or at point blank range, kicked, pulled by the hair, slammed on the ground, tazed…don’t assume they’re doing anything more wrong than you have done.  Or that your children have done. Or that [insert well-bred Black friend’s name here] has done. Assume they were compliant. Or assume they were noncompliant. Just know that if they were Black, there’s a chance it got them killed.