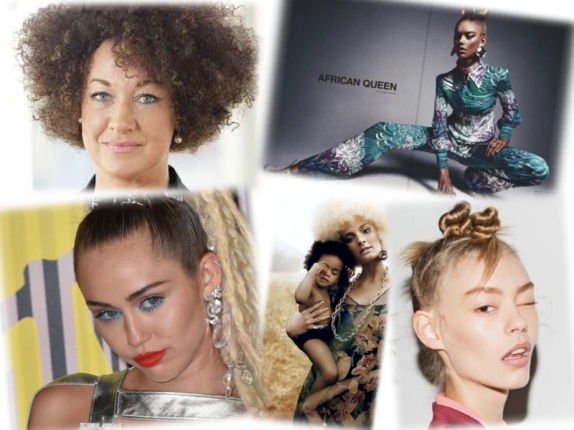 Two-year olds are notoriously selfish. Their favorite word? “Mine!” About everything. Especially somebody else’s stuff that’s decidedly not theirs. Most kids outgrow it. Those that don’t become sociopaths. Or Donald Trump. Or appropriationists.

I suppose it’s hard having a color as a culture. But whose fault is that? Our slaveholding founders should have thought about the limitations of elevating ‘white’ from absence of color to Ahura Mazda of color. Since they didn’t, white people simply “Mine!” their way through history. Frankly, I’m sick of it.

Anyone’s stuff that looks more interesting is fair game, but Black folks toys are the favorite for snatching because they’re usually shinier and more colorful. And Colored people have so much cool stuff! News flash: That’s ’cause making trumps taking any day.

Here’s how to appropriate in 3 simple steps

Hey, it worked for Columbus. Why bother to make what you can take? And if you’re taking it, why not just claim yourself creator of it?

Looking for a new hairstyle? Go on Marc, Miley and the Kardashian KKK  – rename Bantu knots, dreadlocks and cornrows mini-buns, twists and braids. Dub them “edgy” and “fashionable,” and talk about how you inspired, debuted or rocked them. Top it off by calling Zendaya’s braids nasty, stopping just short of calling her a dirty hippy.  See? Easy as 1-2-3. Black people weren’t really all that happy being nappy, anyway.

Music putting you to sleep? Not fit for anything more turnt than the Carleton dance? Go ahead and take ours, Iggy. Billboard will make you Top Rapper of the year.

Not enough color in your life? Just take some, Rachel. And while you’re at it, why not grab an HBCU degree and NAACP chairmanship, too? Colored folks don’t know how to use all that color, anyhow.

Want regality without the reality? Put a skinny white model in blackface and exotic prints, then call her an African Queen or celebrate her sensuality. Or, put another skinny white model in an afro wig and accessorize her with a little Black baby. All that fabulosity, and you never had to set a foot on the dark continent. But if you like to travel, why not just claim the whole continent – again – for a romantically revisionist video? Right, Taylor? Though it’s surprising you couldn’t find a single Black person on the whole damn continent to put in the video, especially considering how much you like the way Black women shake it. But I guess that would ruin the colonial fantasy.

White men go for the big ticket appropriations. Want to rally folks around funding issues deleterious to Black folks and inviting racist keynote speakers to talk about them at your events? Compare your efforts to the Civil Rights movement, Mr. Koch. Want to make Kim Davis look like something other than the homophobic hypocrite she is?  Steve King and Jesse Lee Peterson have an idea — just call her Rosa Parks!

As if hundreds of years of taking Black lives wasn’t enough to affirm belief in the superiority of white ones, why not start a movement? No, wait. No need for all that. Simply change “black” to “all” and you’re there.

Look, imitation is not the sincerest form of flattery when it’s stealing.  Black people, Black culture, Black lives – damn! Can we have something?!

Oh wait – that’s right. We did get to keep the economic inequity. Redlining. Poverty. Microaggressions and macroassaults. Compromised health and circumscribed happiness. You want our asses but not our ass whippings. Our slang but not our stories. Our hair but not our hurt. Our poetry minus its pain. White privilege allows you to appropriate what’s good from Black culture and absquatulate from what’s bad.

It doesn’t work like that. You have to sing through suffering, and create from nothing to make the things we do. You haven’t done that, so you steal from those who have. When you snatch and claim things that are not and never have been yours, it’s not appreciation. It’s appropriation. And we’re the thugs?

“Mine!” is kinda cute and only a little annoying when two-year olds do it because you know the bad behavior will end.  It’s ugly and infuriating when the privileged do it because it’s been going on forever. White ‘culture’ is a hell of a lot older than two. Time to start acting like it.